The new "Pet" on the block: radio imaging with Zirconium-89

This is the third in a series of articles looking at the hot topic of the patenting of radiopharmaceuticals. In this article we are focusing on zirconium-89 (89Zr) labelled molecules, such as antibodies, and their use in diagnostic imaging. The use of 89Zr in diagnostic imaging is relatively new and the patent area has become “hot” in the last five years.

Antibodies and other compounds labelled with zirconium-89

Labelled molecules such as antibodies can be used to image, monitor and measure biological processes at molecular or cellular level, e.g. to visualise and characterise tumour lesions. Several imaging techniques have been used, but positron emission tomography (PET) is often preferred since higher spatial resolution images can be obtained and the images can be analysed quantitatively more accurately with PET. In a PET scan, a patient is given a dose of a medication that contains a positron-emitting radioactive element. The PET cameras then produce a series of “slice” images, which when combined give a 3-D picture of the patient. A more detailed description of the PET scan process can be found in our last article where we reviewed the use of fluorine-18 in PET radiopharmaceuticals.

Antibodies are attractive candidates as imaging agents since specific uptake of the antibodies by the target tissue can be achieved by using radioisotope-labelled antibodies directed against tumour-associated antigens. However, the pharmacokinetics of intact antibodies are relatively slow (t1/2 = 3 to 4 days) making it necessary for the radioisotope used in labelling the antibody to have a long half-life.1  The commonly used PET radioisotope, fluorine-18, is not suitable for use with antibodies as its half-life is too short.

Zirconium-89 (89Zr) has several advantages when used as a label for imaging agents such as antibodies. Its half-life is 3.3 days, which matches the pharmacokinetics of antibodies. The average positron energy of 89Zr is relatively low (395 keV), which makes it an ideal candidate for high resolution PET imaging using compounds like antibodies, which slowly accumulate in the target tissue.1 Additionally, 89Zr-labelled compounds are safer to handle and more stable in vivo making them more suitable as imaging agents than e.g. iodine-124-labelled imaging agents in clinical applications due to the energy of positrons and gamma photons emitted by iodine-124.1,2 As a result of this, there has been a sharp increase in the number of patents filed relating to 89Zr-labelled molecules such as antibodies for use in diagnostic imaging or treatment.

A summary of the major applicants and the main subject matters for the 89Zr patent landscape is given in Table 1, below. 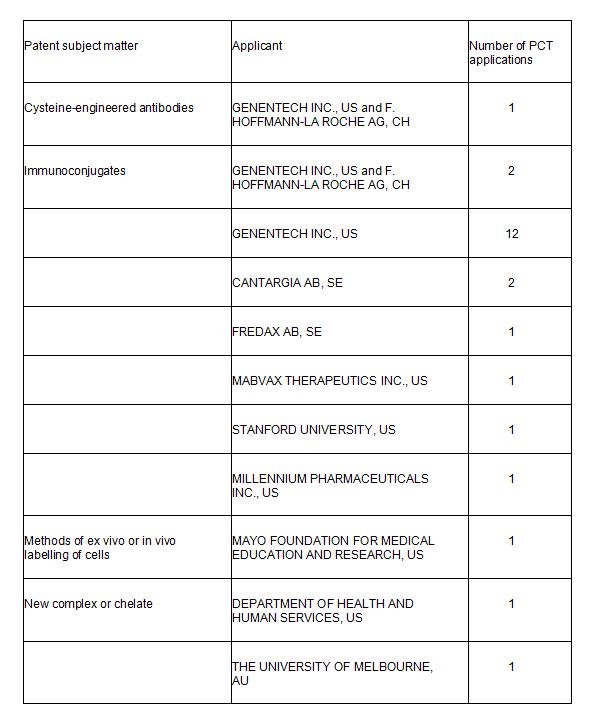 The earliest filed application (WO2011/056983) amongst the 24 identified applications was filed in November 2010 in a joint application by F. Hoffmann-La Roche AG and Genentech, Inc. The application is directed to methods of design, preparation, screening and selection of cysteine engineered antibodys (Ab) where one or more amino acids of a parent antibody are replaced with a free cysteine amino acid. These antibodies are conjugated to one or more zirconium complex (Z) labels through a linker (L) to form cysteine engineered zirconium-labelled antibody-conjugates Ab-(L-Z)p. The zirconium complex Z can consist of a desferrioxamine moiety, which is coupled to the cysteine engineered antibody through the linker. An example of such a labelled antibody-conjugate is shown in Figure 1. 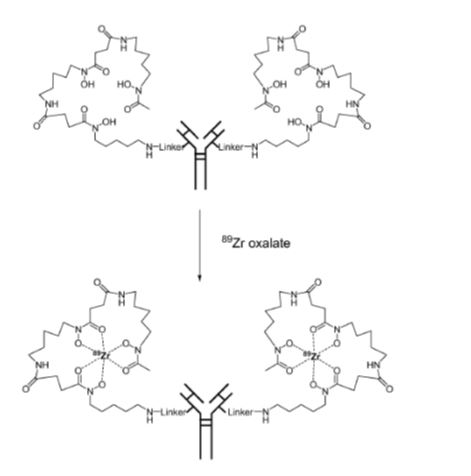 A similar concept is used in WO2011/153346 (F. Hoffmann-La Roche AG and Genentech, Inc.). This application can be seen as the first application in a series of applications by Genentech Inc. directed to various antibody conjugates for diagnosing and treating different cancers. WO2011/153346 is directed to anti-STEAP-1 antibodies and immunoconjugates. STEAP-1 is a member of cell surface serpentine transmembrane antigens and it is expressed predominantly in prostate cancer. Common chelating ligands, such as DOTA, DOTP, DOTMA, DTPA and TETA are used to bind and couple the 89Zr to the antibody. In WO2012/087962 (Genentech, Inc.), the antibody binds to mesothelin, which is a cell surface glycoprotein that is significantly overexpressed in a variety of tumour types. Other examples of applications targeting proteins commonly associated with cancer are

The immunoconjugates of the above listed applications can all be labelled using 89Zr and desferrioxamine as described in WO2011/056983.

There are a number of other companies besides Genentech Inc. and F. Hoffmann-La Roche AG that are also working on similar concepts where antibodies are labelled with 89Zr. Here follow a few examples of other actors in this space:

Cantargia AB has filed two applications (WO2015/132602 and WO2016/020502) directed to antibody-based agents for the treatment and diagnosis of diseases and conditions associated with IL-1 and/or responsive to inhibition of IL-1 signalling e.g. leukemias and melanoma. The antibody-based agent is labelled with 89Zr using desferrioxamine.

Stanford University has developed glypican-3-specific probes for use in PET imaging of cancer cells in the most common liver cancer (WO2014/159087). The probes comprise a glypican-3-specific monoclonal antibody or fragment conjugated to 89Zr using desferrioxamine.

Mabvax Therapeutics, Inc. has developed a method for producing an antibody or functional fragment directed against Sialyl-Lewisa (sLea) using polynucleotides that encodes anti-sLea antibodies (WO2015/053871). sLea is a carbohydrate that has been shown to be expressed on tumours of the gastrointestinal tract. The synthesised antibodies or fragments can be labelled with 89Zr using desferrioxamine and used to detect tumour formation in a patient.

Millenium Pharmaceuticals, Inc. has developed a method of treating cancer with a proteasome inhibitor. One part of the treatment method is to conduct measurements of tumour features using biomedical imaging techniques involving antibodies labelled with 89Zr (WO2014/200969) in order to assess the progress of the treatment and whether any changes to the treatment should be made.

Other compounds than antibodies

The Mayo Foundation has developed methods of ex vivo or in vivo labelling of cells for in vivo imaging, which do not involve the use of antibodies (WO2016/144873). Instead of antibodies, the cells are labelled using 89Zr chelated with an isothiocyanatobenzyl derivative of desferrioxamine (DFO-Bz-NCS), where the NCS of the chelate reacts and forms a covalent bond with primary amine groups present on cell surface membrane proteins.

The Department of Health and Human Services of the United States of America has developed an imaging complex that comprises 89Zr, a polycation e.g. protamine sulfate and an optional third component that is an anionic polysaccharide e.g. anionic glycosoaminoglycan (WO2013/138696). The 89Zr labelled imaging complex are taken up nonspecifically into cells, which leads to a higher density of 89Zr in the cells than can be achieved with labelled antibodies.

The University of Melbourne (Australia) has developed a radionuclide complex as shown in Figure 2 below (WO2016/058056). The synthesis of conjugates of this compound with biological molecules is simpler and more amenable to the presence of pH-sensitive molecules, such as antibodies, than other desferrioxamine-based molecules. The complex also has an improved affinity for 89Zr compared to DFO-Bz-NCS.

The patent landscape of 89Zr-based imaging agents is currently dominated by the use of known technologies and chelates to label compounds with 89Zr. There are some indications though that in the future we may see more applications directed to other aspects such as new chelates and labelling techniques.

i We conducted our patent search in Thomson Innovation limiting the search to PCT applications with an application date between 2006-01-01 and 2016-06-30 directed to imaging or radiotherapy using zirconium 89. The following search string was used: “ALL=((radioimmuno* OR radio ADJ isotope* OR radioisotope OR radiopharmaceutical* OR radionuclide) AND (imaging* OR radio ADJ therap* OR radiotherap*)) AND PN=(WO) AND CL=((89Zr OR Zr89 OR zirconium-89 OR zirconium ADJ 89 OR zirconium OR 89 ADJ Zr OR Zr ADJ 89) AND (antibod* OR anti-bod*)) AND AD>=(20060101) AND AD<=(20160630);”. This search returned 112 patent applications, which were then reviewed for relevance and trends.