This is the first in a series of articles looking at the hot topic of the patenting of radiopharmaceuticals.  In the theranostic pair of technetium and radium, a compound comprising radioactive technetium is used to image a disease-affected region such as a tumour, and the same compound comprising radioactive rhenium is then used to treat the region.  Due to the similarities of the chemistries of the two isotopes, the imaged region will correspond to the treated region.  Even though the technology field is in its infancy, at least one product has already reached the clinical trial phase.

In the last couple of decades nuclear imaging and systemic radiotherapy have become viable detection and treatment options in the fight against cancer. As a result of extensive research, more and more patent applications are being filed directed to inventions involving radiopharmaceuticals. In a series of articles, we will review the patent landscape of radiopharmaceuticals looking at trends and new advances in the area during the last ten years (2006-2015). Each article will focus on a radioisotope or radioisotope pair. Here we focus on technetium and rhenium and their use as a theranostic pair in diagnosis and therapy.

The term “theranostic” refers to the ability of compounds/materials to be used for diagnosis as well as for therapy. The aim of these compounds/materials is to overcome undesirable differences in biodistribution and selectivity, which can exist between distinct diagnostic and therapeutic agents.1  In practice, with a theranostic pair, the theranostic compound containing the imaging radionuclide is first administered to the patient in order to identify the disease or to locate the affected area in the body. Once identified/located, the disease can be treated by administering the theranostic compound containing the therapeutic radionuclide in a target specific way as the biodistribution of the imaging and therapy radionuclides are the same. In the area of radiopharmaceuticals, other examples of theranostic pairs are 111In/90Y and 68Ga/177Lu.2

Technetium-99m (99mTc) and rhenium-188 (188Re) are two transition elements that share a similar chemistry. This makes it possible to obtain analogous complexes of 99mTc and 188Re having the same structural characteristics with many categories of ligands.3  It has been shown that when a pair of 99mTc and 188Re complexes exhibiting the same molecular structure and chemical composition, and only differing in the metal ion, each member of the pair exhibits the same biodistribution.4  In addition, 99mTc has almost ideal nuclear properties for radionuclide diagnostics (Eg = 140 keV, t1/2 = 6.06 h). The emission energy is enough to penetrate tumour tissue while simultaneously presenting a relatively low radiation dose and the half-life period ensures reasonable medical imaging intervals.5  It is also easily available through the transportable 99Mo/99mTc generator. 188Re in its turn has very good radionuclide properties for systemic therapy through its high-energy β-particle emission (Eβmax = 2.1 MeV, t1/2 = 16.9 h), which allows for an effective energy transfer to cancer tissue, and the associated γ-emission (155 keV) can be used for imaging purposes.6  188Re can also be conveniently produced using the 188W/188Re generator system.7

A summary of the patent landscape in the area of 99mTc/188Re is given in Table 1, below. 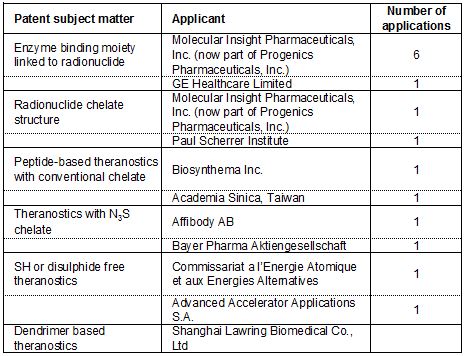 The focus of the work done by MIP is enzyme binding moieties linked to radionuclides or other imaging moieties. Their first PCT application in the period reviewed, WO 2008/028000, is directed to a series of conjugates which combine peptidase-binding moieties with radiopharmaceutical moieties or optical imaging moieties with the aim of diagnosing, treating and monitoring the progression of certain diseases, such as heart failure.
A similar concept is used in WO 2009/089383 where a radiopharmaceutical is disclosed comprising a complex or compound that contains a sulphonamide moiety, which is capable of binding to the active catalytic site of CA-IX, and a radionuclide adapted for radioimaging and/or radiotherapy (see Figure 1). CA-IX is a membrane-anchored isoform of carbonic anhydrase with its catalytic domain in the extracellular space. It has a limited tissue distribution and is found at low levels primarily in the gastrointestinal tract. Increased CA-IX expression has been detected in carcinomas of the cervix, ovary, kidney, esophagus, lung, breast, and brain. The radiopharmaceutical complex can therefore be used to detect and potentially treat these types of cancer. A further development of the radiopharmaceutical complex was disclosed in WO 2010/065906 where the focus was on the metal chelate part of the complex.

Using a similar approach, MIP has also developed radiopharmaceuticals disclosed in WO 2010/036814 comprising complexes or compounds (see Figure 2 for the general structure) that contain a functionalized proline moiety, which is capable of selectively inhibiting seprase, and a radionuclide adapted for radioimaging and/or radiotherapy. Seprase, a fibroblast activation protein alpha (FAP-α), is a transmembrane serine peptidase that belongs to the prolyl peptidase family. It is expressed in epithelial cancers and has been implicated in extracellular matrix remodelling, tumour growth, and metastasis.

MIP has also developed radiopharmaceuticals (see Figure 3 for the general structure) that interact with human prostate-specific membrane antigen for imaging or treating cancer of the prostate (WO 2008/058192 and WO 2010/065902). 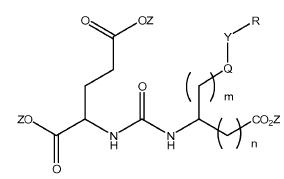 Figure 3. Radiopharmaceutical wherein the radionuclide binds to the Q-Y-R moiety.

A further development of the chelating moiety for radiopharmaceuticals is disclosed in WO 2010/065899 comprising complex ring structures forming multidentate chelates around the radionuclide. An example of such a structure is given in Figure 4.

Other applicants and their inventions

The other applicants that we identified filed a single PCT application each. There are common themes in subject matter that can be seen amongst these applications and also within the applications filed by MIP.  Table 1 sets out the various categories of subject matter and the number of filings in each.

Different ways of approaching the chelate

The radionuclide binding part of the theranostic compound plays an important role in the radiopharmaceutical. Some applications like WO 2007/147482 by Paul Scherrer Institute focus solely on the chelate structure, which binds the 99mTc or 188Re radionuclide (see also WO 2010/065899 filed by MIP). Others like WO 2014/052471 by Biosynthema Inc. and WO 2012061113 by Academia Sinica, Taiwan, use conventional metal chelating moieties, such as DOTA, or commercial radiopharmaceuticals like 99mTc Pentetate to produce this part of the theranostic compound. Figure 5 shows some examples of the different types of chelate structures.

Peptides as a part of theranostic compounds

The chelate structures of WO 2014/052471 and WO 2012061113 (mentioned in the previous paragraph) are attached to cancer-targeting peptides. The theranostic compound of WO 2014/052471 has the general formula MC-S-P having at least one (radio)metal (M) stably bound by a chelator (C); S is an optional spacer covalently linked between the N-terminal of P, and P is a gastrin releasing peptide receptor (GRPR) peptide antagonist. High density expression of GRPRs has been shown to occur in prostate cancer, mammary carcinoma and lung cancer.

A slightly different approach to using polypeptides in theranostic compounds is taken in WO 2009/080810 by Affibody AB where a part of the HER2 binding polypeptide makes up the chelating structure together with a mercaptoacetyl coupled to the N-terminal of the polypeptide. The N3S chelating motif is provided by the nitrogen atoms of the first three consecutive peptide bonds from the N-terminal together with the SH group of the mercaptoacetyl. By binding 99mTc or 188Re in the N3S chelate, the radio labelled polypeptide can be used in diagnosis and treatment of cancer characterized by overexpression of HER2, such as breast cancer.

The same N3S chelating motif was used in WO 2011/110490 by Bayer Pharma Aktiengesellschaft, but instead of using the SH group of mercaptoacetyl the SH is provided by a cysteine amino acid. The cysteine based N3S chelate is used to radioactively label single-chain variable fragment (scFv)-labelled antibody fragments for diagnosing or treating cancer or atherosclerosis.

There are also examples of where peptides are used to bind the radionuclide but where SH-containing amino acids like cysteine are excluded from the peptide (as the presence of an unpaired cysteine may interfere in the folding processes of a protein and therefore reduce the yield of production of the modified protein or alter its final conformation). In order to avoid this problem, Commissariat a l’Energie Atomique et aux Energies Alternatives has developed cysteine-free efficient technetium and rhenium chelating peptide tags disclosed in WO 2010/076654. These tags can be used to label proteins or polypeptides.

Efforts have also been made to produce analogue compounds without disulphide bridges. An example of this is disclosed in WO 2010/004512 by Advanced Accelerator Applications S.A. where an analogue of octreotide has been prepared where the disulphide bridge of octreotide has been replaced by a dicarba bridge. These octreotide analogues can then be labelled with 99mTc or 188Re and used for treating tumours, acromegaly or rheumatoid arthritis. 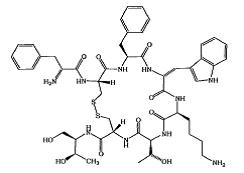 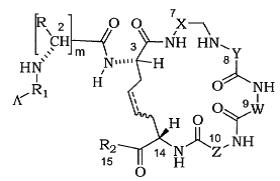 GE Healthcare Limited has developed fibroblast activation protein (FAP, also known as seprase)-inhibiting boronic acid compounds that can be labelled with 99mTc or 188Re for use as in vivo diagnostic and imaging agent for fibrosis (see Figure 7). These compounds disclosed in WO 2014/001538 are structurally similar to the compounds developed by MIP in WO 2010/036814. 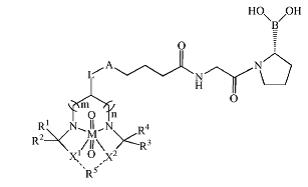 Figure 7. An example of the FAP inhibiting boronic acid compounds disclosed in WO 2014/001538.

Another interesting concept is disclosed in WO 2015/104589 by Shanghai Lawring Biomedical Co., Ltd, where dendrimer conjugates have been developed for the treatment of hypoxic tumours, which respond poorly to conventional treatments. The dendrimers act as a supravector, which is combined with a radionuclide binding nitroimidazole ligand complex (see Figure 8). The conjugation between the dendrimer and the radionuclide/ligand complex may be non-covalent, so as to ensure the release of the radionuclide/ligand complex in the subject and/or in the cells upon administration. 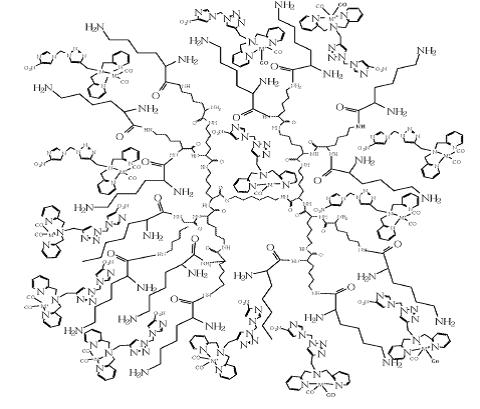 Figure 8. An example of the dendrimer supravector with the radionuclide binding nitroimidazole ligand complexes inserted in the outer layers of the supravector.

i We conducted our patent search in Thomson Innovation limiting the search to PCT applications with an application date between 2006-01-01 and 2015-12-31 directed to imaging or radiotherapy using technetium or rhenium. The following search string was used:”ALL=((radio ADJ isotope* OR radioisotope* OR radiopharmaceutical* OR radionuclide*) AND (imaging* OR radio ADJ therap* OR radiotherap*)) AND AD>=(20060101) AND AD<=(20151231) AND CL=((technetium* OR 99mTc OR 99Tc OR Tc99m) AND (rhenium OR 188Re OR 186Re OR Re188 OR Re186));”. This initial search returned 190 patent applications, which were reviewed to refine the results to applications only directed to theranostic pairs containing technetium and rhenium. This final refinement reduced the number of applications down to 17.