Not such a corny idea - patent infringement for food companies

There is a much higher risk of patent infringement for food companies operating in Australia, with more inventions now susceptible to protection.

Many, many years ago, sometime between about 3000BC and the time of the Hernan Cortes and his conquistadores, a remarkable advance was made by the Mesoamerican people. Instead of eating ‘tlaxcalli’ or flat corn bread, someone decided to fold it over, stuff it with fish, small insects, ants, locusts or snails and, hey presto, the taco was born. Well that’s what the food historians tell us anyway.

In the circumstances, you’d think that if a patent had been filed for a taco it would probably have expired by now. And you’d be wrong. Don’t believe me? Then take a look at Australian patent no. 2006100568B4 for ‘Square bottom taco shell’. The owner of that patent now has the right to exclude whom they wish from making, distributing, selling or otherwise exploiting:

Diagramatically, what we are talking about here is a monopoly over a taco as set out in Figure 1. 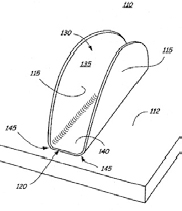 So how has this happened? Fair enough,our Mesoamerican friends may not have devised a taco having a flat base element. So maybe there is some aspect of newness in the taco in Figure 1. Perhaps.

But surely you can’t give someone the right to exclude others from these sorts of tacos merely because of this difference? Is it really the case that minor variations to something known, even something having the history of a taco, can give rise to an intellectual property right – a property right that is distinct from a right to the taco itself?

The patent referred to above is a good example of what we are talking about here. It is an innovation patent and it can stop others from making any taco that has features as described above. In contrast, a standard patent (AU2002359394B2) that is related to this Innovation patent can only stop others from making flat bottomed tacos that have a side wall height 1.5 to 4.0 times greater than the width of the base. A taco as broadly described above could not be protected in the standard patent because it would be obvious.

So is this the outcome that the government intended? It seems that the answer is ‘yes’. Specifically the statutory intention appears to be to provide protection for products having a relatively short life and embodying a relatively lower standard of innovation (ie. products that lack inventive step). This may well seem comical, but there are now some very serious commercial considerations that arise for companies that operate in markets where these sorts of products are common place – such as the food sector.

First, because inventions that embody a much lower standard of innovation are now susceptible to protection, many Australian food companies that do not have the R&D budget of foreign companies may now be well placed to build their own intellectual property estate. Don’t forget that what we are talking about when we speak of ‘intellectual property rights’ is a right that is as extensive as any other legal right pertaining to a tangible property such as a car or house. A relevant patent right can be licensed, sold or used to raise capital. Ultimately the taco patent might generate more pesos than the taco itself!

Of course, a patent cannot be obtained if the invention has already been sold or otherwise put in the public domain. So it will be up to the company seeking protection to seek professional advice before product release.

Second, there is now a much higher risk of patent infringement for food companies having operations in Australia. This is the other side to the coin. With more inventions now susceptible to protection, over time the patent landscape will become much more complex so that careful investigation and consideration will be required before product release. Make no mistake, the owner of an Innovation patent has the same right to legal remedy as does the owner of a standard patent including an injunction and at the choice of the patent owner, either damages or an account of profits.

Without question the Innovation patent system has changed the Australian legal and commercial framework in which food companies operate. We are living in an age where the market release of a corn chip escalloped to prevent melted cheese from running over the edge could infringe a patent right. Or the release of a tortilla shaped to form a closure at one end when rolled into a burrito might destroy a valuable right that could have been obtained with an Innovation patent.

In the above circumstances, Australian food companies must now seek professional advice as to how the Innovation patent system will impact on their businesses. The advice might be to undertake a freedom to operate search to identify the most obvious risks and perhaps to develop a patent position that might then be cross licensed as part of a commercial settlement should an infringement concern arise. As with all things, timing will be critical and one should seek advice on patent protection and infringement well before product release.